We launched SIMPLIfied 2 a few weeks ago after over six months of development.  We have found it invaluable in our office since, however it is tricky to convey this, as the best way for anyone to appreciate it is to try it yourself.  To encourage this, we released the basic version for free.  This version provides a simple mechanism to analyse your SIMPL programs for easily recognisable issues which would generate notices, warnings or errors in a normal compile but in the fraction of the time without having to go through the time consuming compilation step. Also, when you save your program in SIMPL, it automatically refreshes in SIMPLified 2.

To try and demonstrate how the other entitlements can help, we’ve done a case study showing how we used it in a recent job.

Brief:  Our client was working on a £100k+ job and called us in to resolve performance functionality issues in the system.

Our Approach: We used SIMPLified 2 to isolate and resolve problems.

First of all we used the SIMPLified 2 Debugging Analysis tools.  This highlighted significant problems with the program structure.

Some issues were obvious, such as, over 100,000 signal warnings and notices which were identified without the usual 10 minute compile.  Others, such as, ‘commented’, but connected signals were only identified by SIMPLified – this would have been impossible otherwise. 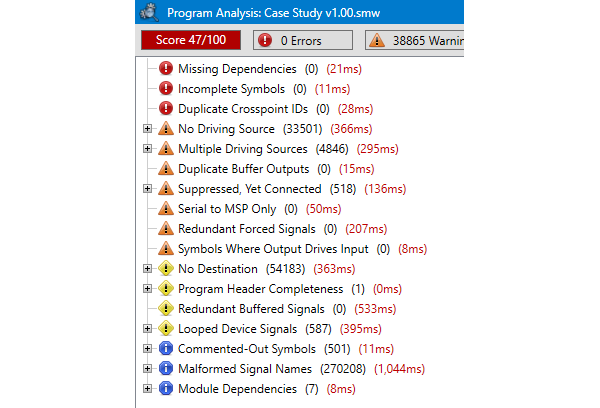 Then we used SIMPLified 2’s Refactoring tools to identify common code and differences:

Common code – this meant we could safely identify code that could be modularised, resulting in a cleaner, more maintainable system.

This just shows a fraction of what SIMPLified 2 can assist with.  It doesn’t fix things but shows you where things are wrong and that can only save you time and make you more efficient.

However, you probably don’t want to take our word for it, so we asked Marcus from Integrated Experience who told us “I ran it on a couple of my template programs that I had thought to be tidy and compact already – all I can say at the moment is it has opened up a refactoring rabbit hole for me and made me look at everything with fresh eyes… Really quite an interesting piece of software that helps review code quickly.”

If you want to try out SIMPLified Refactoring Entitlement for yourself, use code TRIALS2REF for a two week trial (only one use per person).

To find out more about SIMPLified 2 read our launch story here.  If you'd like to download a copy visit out shop here.